We’re Biased Toward the Neutral Zone

Patients have a tendency to request a more “normal” (Class I) looking prosthetic tooth arrangement. We respectfully suggest that you ignore the patient’s wishes for the following reasons:

Forcing a Class II into a Class I tooth arrangement will create an anterior cantilever on the mandibular denture and at the least, cause it to easily dislodge. When opposing a maxillary complete denture this cantilever situation will constantly compress the maxillary alveolar ridge and over time cause the maxillary denture and possibly the maxilla to fracture.

Forcing a Class III into a Class I tooth arrangement will crowd the patient’s tongue, and the mandibular denture will easily and often become dislodged in the posterior. 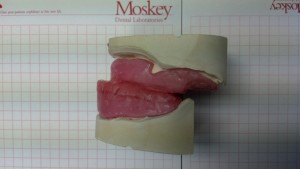 relines or rebases in an attempt to stabilize the denture (that was probably well adapted in the first place) for Class II violations,

denture liners and conditioners in an effort to ease the pain of the compressed incisive papilla and crest of the ridge for Class III violations.

All the relines, rebases, liners, and conditioners will not fix violations of the laws of dental physics.

Complete dentures must be set in the neutral zone with the correct teeth for the Angles Class as follows:

It is our responsibility to advise a dentist when the “Neutral Zone” or Angle’sClassification is violated. It is as important for dentures to function properly as to be esthetically pleasing.

This entry was posted in Uncategorized. Bookmark the permalink.