Posted on August 15, 2019 by Rob Lash
Posted in Uncategorized | Leave a comment

Posted on July 8, 2019 by Rob Lash
Posted in Uncategorized | Leave a comment

The Dorsal device has upper and lower occlusal splints to open the vertical relationship while holding the mandible in the desired forward position.
The “fins” on the mandibular splint interface with inclines built into the buccal of the upper splint to set a specific anterior mandibular position. The inclines keep the mandible from dropping open during sleep.
The appliance is fabricated with adjustable screws in the maxillary to allow further mandibular advancement. A bite should be taken with the mandible advanced 65%-75% and a 4mm inter-incisal opening.

Benefits of the Dorsal device

The Dorsal Appliance is a popular choice for snoring and obstructive sleep apnea. The two piece construction allows for patient comfort and lateral jaw movement. Patients are more compliant because while wearing the device they can open, close and talk or yawn, reducing the chance of muscle trismus.

The Moses® sleep disorder device holds the maxillary and mandible in a fixed position with a mechanism on each side to allow titration of the mandible in continuous increments (1/8 mm per turn) up to 6mm from starting position. While the Moses® appliance has been used as an obstructive sleep apnea treatment, it is also effective for patients who snore.

Benefits of the Moses® Appliance

Many patients prefer the Moses® appliance because it is comfortable to wear. Because there is no material in the anterior or the palate, patients are able to talk, sip water, and close their lips while wearing it. There is also more room for the tongue than in some other devices. The Moses® is cleared by the FDA as a treatment for obstructive sleep apnea and snoring.

It’s the beginning of a new era.

AvaDent Digital Dental Solutions has always provided us the ability to choose moulds from different tooth manufacturers. But now that we are able to choose a completely milled monolithic denture with Signature Teeth™, we are no longer limited to existing pre-manufactured tooth lines and moulds.

This brings new opportunities and possibilities in both function and esthetics. There is no need to grind teeth anymore, or add unwanted diastemas to achieve a perfect setup. We merely adjust the tooth design to get the perfect esthetic setup every time.

Our esthetic design options are endless!

We can design teeth all together, in groups, in pairs, or shape each tooth individually to create the perfect natural smile for your patient. Experience complete design freedom from  this fully milled prosthesis.

END_OF_DOCUMENT_TOKEN_TO_BE_REPLACED 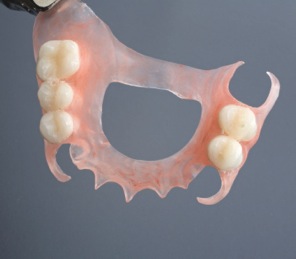 Flexible partials – more flexibles than ever!

In the past flexible appliances were considered temporary because they could not be successfully added to or repaired.  Moskey Dental Laboratory has two products to make “flexibles” less temporary.  Visiclear and Duraflex can be repaired, added to, and adjusted to make short term appliances longer term successes.  How?  Visiclear and Duraflex is a thermoplastic and will bond with itself, unlike Valplast and other nylon based materials. Duraflex and Visiclear allow us to keep thickness to approximately 1 mm for a comfortable, lightweight, yet retentive appliance.

Visiclear is just that, a barely visible material due to its clear structure.  It allows the underlying tissue and enamel to show through the material for a better esthetic result. 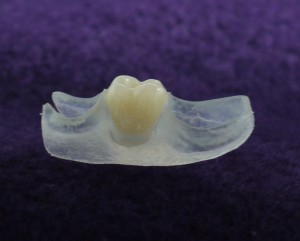 Both materials share the same intra oral requirements as other flexible and partial denture designs:

1.  a minimum of 4mm of inter-arch clearance to allow for denture base thickness and prosthetic tooth  positioning with properly formed diatorics.

2.  desirable undercut in the gingival one-third of the abutment teeth as the retention is in the form of “wings” (as opposed to clasps) that engage the buccal undercut at or near the cervical margin. Such placement improves retention and esthetics. In certain cases we may extend an appliance posteriorly to engage available lingual undercuts.

3.  an anterior and posterior abutment for unilateral appliances.

4. standard or premium denture teeth, as economy teeth may not withstand the   pressure during processing.

Patient care of their Duraflex/Visiclear appliance:

Just click here to send us a case today. 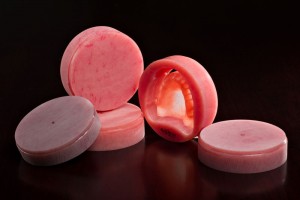 Conventional acrylic processing has always been a challenge due to three issues that affect the fit of denture bases. The three issues are:

Thermal expansion and contraction occurs during the process of curing and cooling acrylic. Acrylic can be cured in a one stage process at 158°F for 8 hours, or a two stage process at 1.5 hours at 158°F and the second stage is 212°F for 30 minutes. The flask is then slowly cooled to room temperature. If the flask is cooled too rapidly it will cause stress in the acrylic resulting in the acrylic base no longer fitting flush against silicone or gypsum products.

Recovery distortion is a common technique problem. Improperly de-flasking a denture can cause distortion of the denture base. Common errors are not using a flask ejector, using a hammer on the knockout plate and outer investment, and prying the denture off the cast with a knife or pneumatic chisel. Processed acrylic is easily removed from the denture if the application of tin foil substitute is used correctly.

Adaptive accuracy is where the acrylic base fits the cast and mouth without shifting or dislodgement. The critical points of adaptive accuracy are: the alveolar ridge, flanges, anterior palate, and glandular tissue. Glandular tissue is the anatomical region where the posterior seal is placed. If the impression material is too viscous, or too much pressure is used in custom tray or denture placement it will affect the seating of the denture base in the posterior area.

The Avadent digital milled denture addresses and corrects all three processing concerns! First, there’s no human involvement so there can be no human error. Thermal expansion/contraction is eliminated because the denture base is milled at room temperature from a pre-manufactured solid acrylic puck that is created under extreme pressure to ensure density and stability.

Recovery distortion is eliminated because the gypsum products have been eliminated – there’s no flask so no de-flasking.

Adaptive accuracy is increased because Avadent provides the correct impression materials that matches the resiliency of mucosa and doesn’t compress or displace the tissue, providing the most accurate denture base ever made. 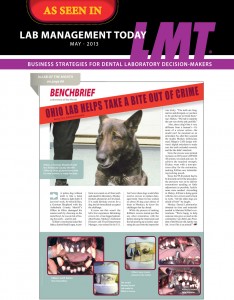 Killian, a German Shepard with the Ashtabula County Sheriff’s office in Ohio had a habit of chewing on his metal bowl. As as result he damaged his four canine teeth. Killian’s veterinarian asked her father, a dentist, to perform four root canals, and he chose Moskey to fabricate the crowns. He had relied on Moskey’s expertise in dentures, implants, and in digital crown and bridge for many cases, but did not know whether they had experience with animals. As it happens, they did!

Read the article by clicking on In LMT-May2013-Moskey.

We’re Biased Toward the Neutral Zone

Patients have a tendency to request a more “normal” (Class I) looking prosthetic tooth arrangement. We respectfully suggest that you ignore the patient’s wishes for the following reasons:

Forcing a Class II into a Class I tooth arrangement will create an anterior cantilever on the mandibular denture and at the least, cause it to easily dislodge. When opposing a maxillary complete denture this cantilever situation will constantly compress the maxillary alveolar ridge and over time cause the maxillary denture and possibly the maxilla to fracture.

Forcing a Class III into a Class I tooth arrangement will crowd the patient’s tongue, and the mandibular denture will easily and often become dislodged in the posterior.

relines or rebases in an attempt to stabilize the denture (that was probably well adapted in the first place) for Class II violations,

denture liners and conditioners in an effort to ease the pain of the compressed incisive papilla and crest of the ridge for Class III violations.

All the relines, rebases, liners, and conditioners will not fix violations of the laws of dental physics.

Complete dentures must be set in the neutral zone with the correct teeth for the Angles Class as follows:

It is our responsibility to advise a dentist when the “Neutral Zone” or Angle’sClassification is violated. It is as important for dentures to function properly as to be esthetically pleasing.